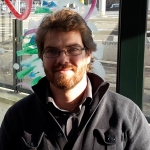 Damien Sirjacobs (born in 1974) is an environmental engineer and an oceanologist. After a thesis devoted to wastewater treatment by macrophytes in Morrocco (Faculté Universitaire des Sciences Agronomiques de Gembloux, 1997), he develops interest for marine environment during a formation concerning remote sensing and modelling of coastal zones (Dundee University, Scotland, 1997). In 1998 he trains in scientific research with two experiences, a first one devoted to soil and water interaction (Volcani National Research Center, Israel) and the other devoted to river and lake water quality (Institut INOVA, Açores, Portugal). Back at FUSAGx (GxABT) he enrols in a research contract in precision agriculture targeting the quantification of the spatio-temporal variabilities of soil parameters with modern sensors, and gets a Master in Biological Engineering (DEA, 2000). He continues at ULg with a specialisation in Ocean Sciences (DEC, 2001), then by a Master in Marine Environment Modelling (DEA, 2003) during which he discovers high performance computing applied to the Aral Sea hydrology and hydrodynamics with the support of an INCO-Copernicus project. During an Erasmus stage at the University of the Azores (2003), he refines his interest for the marine environment, particularly concerning macroalgae dynamics. He starts then a PhD in codirection ULg-UAç devoted to the ecology and population dynamics of the macroalga Codium elisabethae, involving underwater visible imagery. At ULg he improves his programming and geostatistical skills on the occasion of a project devoted to marine satellite imagery (2007–2009), then his skills in botanic diversity while being a teaching assistant at the Laboratory of Phycology, Mycology and Experimental Systematics of Prof. V. Demoulin (2009–2011). Since his PhD completion (2011) and the continuation of the lab by Denis Baurain, Damien Sirjacobs is involved in various pedagogical tasks, computer supports for the lab, as in the pursuit of his research themes pertaining to the distribution and dynamics of macroalgae.