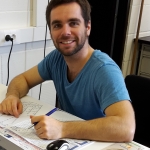 About me
After a Bachelor in Life and Earth Sciences, I completed first a Master's degree in mediation and scientific communication at the University of Aix-Marseille (France), before continuing my education with another Master’s degree in Biology of Organisms and Ecology at the University of Liège (Belgium). I also followed a one-year training as a biology and geology teacher in the University Institute for Teachers Training of Marseille (France). It gave me a large scientific background, both in biology and geology. Basically, I was rather a paleontologist, but since I converted to genetics and phylogenomics.
Paleobiologist at large, I aim to tell the story of Life on Earth, The Land Before Time (yes it is my favorite animated movie…).
PhD topic
In the late 1970s, Woese found out the Archaea and put an end to the dichotomous view of Life eukaryote/prokaryote. This "Woese’s Revolution" shows that Life is divided into three domains (Bacteria, Archaea and Eukaryota) with unreliable relationships. Moreover, the eukaryotic cell seems to have both bacterial operational genes and archaeal informational genes. Rooting the tree of Life then became a problem, several scenarios being able to explain the origin of the eukaryotic cell. (a) The three domains of Life have an independent origin and directly stemmed from the primordial soup. (b) The three domains of Life stemmed from a simple common ancestor, and their evolution proceeded by increasing complexity in eukaryotes. (c) The three domains of Life stemmed from a complex common ancestor, and their evolution proceeded by simplification in prokaryotes. (d) Eukaryotes originated from a fusion event between a bacterium and an archaeon and appeared with the mitochondrion, their other properties having evolved after this event. (e) Eukaryotes originated from a fusion between a bacterium and an archaeon and appeared before the mitochondrion. Hence, this PhD aims to propose a coherent scenario about the origin of the eukaryotic cell, taking into account the rooting of the tree of Life, the potential paraphyly of Archaea, and the internal phylogeny of each domain, while fulfilling the time constraints linked to the appearance of the various lineages. In practice, it will consist in phylogenomic experiments associated to a thorough review of the literature: localization of the root of the tree of Life by concatenated phylogenetic analyses of universal paralogous genes, internal phylogenies of each domain based on multiple concatenations of orthologous (semi-)universal genes, followed by relative molecular dating of the domains and lineages.
Main research topics: Nature of LUCA (the Last Universal Common Ancestor), rooting the Tree of Life, origin & Evolution of the eukaryotic cell.
Other research interests: Origin & phylogeny of Metazoa, origin & evolution of Mammals, dinosaurs.